All of the opinions on this book are my own. 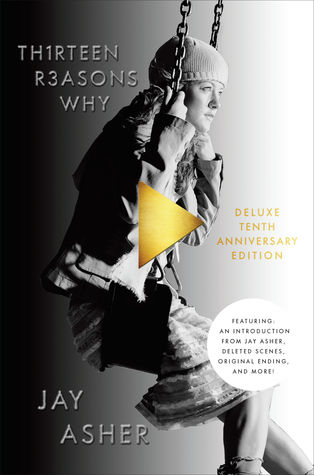 “No one knows for certain how much impact they have on the lives of other people. Oftentimes, we have no clue. Yet we push it just the same.”

Synopsis: You can’t stop the future.
You can’t rewind the past.
The only way to learn the secret . . . is to press play.

Clay Jensen returns home from school to find a strange package with his name on it lying on his porch. Inside he discovers several cassette tapes recorded by Hannah Baker–his classmate and crush–who committed suicide two weeks earlier. Hannah’s voice tells him that there are thirteen reasons why she decided to end her life. Clay is one of them. If he listens, he’ll find out why.

Clay spends the night crisscrossing his town with Hannah as his guide. He becomes a firsthand witness to Hannah’s pain, and as he follows Hannah’s recorded words throughout his town, what he discovers changes his life forever.

When I saw the trailer for the tv show, I was intrigued in a way. It looked very mysterious and I was willing to watch it, but first I needed to read the book. Last month I read the book, and after that I wasn’t willing to watch the show anymore. This book didn’t do anything for me, unfortunately.

The book started immediately in the story. Clay Jensen receives a box with tapes that he has to listen to. I thought it was a good move from the writer to start immediately with the story and to not give an introduction of a hundred pages. We also get a chapter per tape, which makes the book look more organised and less confusing.

When I read throughout the book, I missed the WOW-moments and OMG WHAT IS HAPPENING!?. Every tape was supposed to be a shock as I imagined, but every tape felt a bit lame. Hannah Baker is the girl who committed suicide, which I know is a very serious issue and I have nothing to argue about that. The reasons (13) why she supposedly did do it felt lame. Thirteen people supposedly did something to Hannah to make her break and make an end to her life. I expected these thirteen people to have done worse things. Some didn’t even do anything to her. The writer probably wrote this book about suicide for a good reason, but it didn’t fall in place for me.

The writing was also kind off annoying. The tape played, which showed the voice of Hannah in Italic, while in the meantime Clay’s POV showed him get into stores and stuff and walk to the places on the map. It was confusing at times, because I just didn’t understand what was going on. The switch between the tapes and Clay’s POV were too often. That interupted the tapes the whole time and was very confusing.

This book was a no for me. I expected that I would love it, which makes it even worse. I gave this book 2/5 stars.